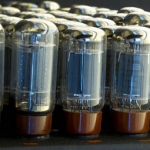 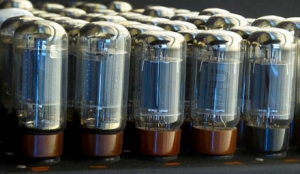 The ENIAC at the Ballistics Research Laboratory. Presper Eckert at the Function table and John Mauchly watching the machine

ENIAC was originally designed to calculate firing tables for WWII artillery, but it wasnt completed until 1946. Although the ENIAC was not finished in time for the war effort, it was used to do calculations for the hydrogen bomb as well as other classified military applications.

With about 18,000 vacuum tubes, 1,500 relays, 70,000 resistors, and 10,000 capacitors, ENIAC was the largest electronic vacuum tube device to have been produced to that time, consuming enough power for 50 homes and capable of 5,000 operations per second. The principal designers were J. Presper (Pres) Eckert and John Mauchly with Herman Goldstine acting as the Army liaison.

The ENIAC was not a stored program computer, but had to be rewired for each new job. The rewiring problem led the team to think about storing the wire configuration as a program in memory, but it was too late to change the design of the machine under construction.

The panel on exhibit here is one of 40 that make up the ENIAC. It was used to read the constants set on switches of the function units and transmit these along the data bus lines that ran around the whole of the machine. The function table was connected via the large plug receptacle on the front