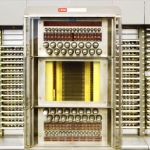 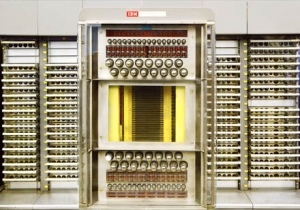 Part of a SAGE arithmetic unit

SAGE (Semi-Automatic Ground Environment) was a large computerized air defense system built in response to the Cold War threat of Soviet bombers. By analyzing radar data in real-time, SAGE provided the Air Force with a picture of the North American airspace and could relay targeting information to fighter planes. In practice, it is doubtful that SAGE could have effectively responded to an invasion.

IBM built the SAGE hardware based on the Whirlwind computer design at MIT. The many technical advances include modems for communication between sites over telephone lines, networking, light guns, graphical displays, and reliable magnetic core memory.

Each of the 27 SAGE installations had two separate computers, the second serving as a hot standby in case the active computer failed. With this backup, availability was an unprecedented 99.6%, when many other computers from that era would fail every few hours. The computer weighed 300 tons and typically occupied one floor of a huge windowless 4-story concrete blockhouse. On another floor, dozens of Air Force operators watched their display screens and waited for signs of enemy activity.

The software was written by The Rand Corporation and the System Development Corporation (SDC) and employed about 20% of the worlds programmers at the peak of the project. When it was complete, the 250,000 lines of code was the most complex piece of software in existence.

Some SAGE centers continued to operate until 1983, more than 20 years after its technology was obsolete and its mission rendered militarily insignificant by the ICBM. As a final irony, in the last years of its use, replacement vacuum tubes had to b