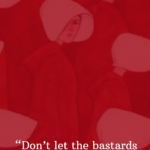 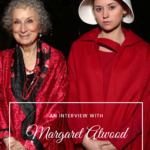 Have you ever wondered how Margaret Atwood writes books? In this episode of Remarkable People, she explains her tactics and techniques. She also spends quite a while geeking out about Macintosh.

Margaret Atwood is the author of The Handmaid‘s Tale and its sequel, The Testaments, as well as more than fifty other books. She is a two-time Booker Award winner.

Her writing serves as a warning of what can happen if we do not protect our rights and resist totalitarian and theocratic governments.

While the topics she covers are quite serious and even “heavy,” this is an enchanting and humorous interview in which Guy laughs out very loud (LOVL) many times.

Question: How do you define your moral compass?

The Handmaid’s Tale on Hulu

Glossary for The Handmaid’s Tale

Guy Kawasaki:
Getting an interview with Margaret Atwood was a lesson from The Handmaid's Tale. Atwood and I spoke at the same event, but the host organization prevented me from talking to her, even threatening me a little. Nevertheless, I persisted. Atwood was brilliant and funny at the event. You can tell if a person is smart by her level of wit. The more acerbic, the smarter. Atwood is off the charts.
After being thwarted at the event, I told the story to my best friend in Canada, Amber MacArthur. She knew both Atwood and her agent, and helped make the interview happen a few weeks later. So, this is Margaret Atwood ... writer, poet, speaker, and predictor of the future. Two time Booker Award winner.
By the way, this podcast contains a touch of profanity. Yes, that's right. Atwood let an F-bomb fly. She's an inspiration to everyone who is trying to resist a dystopian, theocratic, fascist society.
All I can say is thank God, the living sympathetic, empathetic, inclusive, truthful God for Margaret Atwood.

This is Guy Kawasaki, and this is Remarkable People. And now, here is Margaret Atwood.

Guy Kawasaki: Would your English teacher in high school say, "I knew Margaret Atwood would be this kind of writer, this kind of success"?
Margaret Atwood: Okay. I had a couple of English teachers in high school.
Guy Kawasaki: Okay. Would any of them think that?
Margaret Atwood: Okay. So my favorite was called Miss Laurent Smedley. Miss Laurent Smedley had long, white floating hair. And she used to revolve in a circle while reciting Kublai Khan from memory. She made a deep impression on me.
And they came back years ago to do a documentary section on me once I was "famous,” and they asked her that English teacher question, and she said, quite admirably, "She showed no particular promise in my class."
So usually, of course, you get, "Oh yes, I knew at once she was so talented," et cetera. But in this case, Miss Laurent Smedley was correct. I wasn't showing any particular talent in her class. I was too busy watching her revolved around in a circle.
But my next English teacher, called Miss Bessie Billings, was quite keen on what I was by then writing, and I wrote a short story about Miss Bessie Billings, her real name, and it is called My Last Duchess, and that was her teaching style.
She was quite a famous English teacher. She sort of hauled you by the back hairs, through the curriculum that we had to do in order to pass this terrifying set of exams that was going on in the fifties, and she was awfully good at it.

Guy Kawasaki: And would she say she knew?
Margaret Atwood: I kept in touch with her in later years, and she was very keen on my, by then, accomplishments, but she's also the one who famously said about a poem of mine that I showed her, "Well, I can't understand a word of this, dear, so it must be good."

Guy Kawasaki:
Okay. I love that story.
Margaret Atwood: Wait a minute. No, don't think so. Yes. Anyway, she was quite encouraging.
Guy Kawasaki: I've seen and read things where you say you knew you wanted to be a writer at sixteen.
Margaret Atwood: Yes, I did. But of course, I was quite ignorant of what that might involve. I knew nothing about publishing. I knew nothing about any of the processes, and that was because Canada in those years, was very much a backwater, and we hardly had a native publishing industry then.

Guy Kawasaki:
This was a delightful interview to conduct. I love Atwood's message and appreciate her efforts to prevent the end of the world. Her latest book is The Testaments. It won Atwood her second Booker Award. Read it and spread its message to help prevent making America Gilead again.
This is Guy Kawasaki, and this is Remarkable People. Mahalo to Amber MacArthur and Lucia Ceno for making this interview happen. No thanks to the people who prevented access to Atwood in Canada.
This podcast was produced by Jeff Sieh, and marketing goddess, Peg Fitzpatrick. Next week's guest is Wee Man, the star of Jackass, the MTV and movie series, and the only guest who questioned the existence of this podcast.

Margaret Atwood on writing The Handmaid’s Tale, “If I was to create an imaginary garden I wanted the toads in it to be real. One of my rules was that I would not put any events into the book that had not already happened in what James Joyce called the “nightmare” of history, nor any technology not already available. No imaginary gizmos, no imaginary laws, no imaginary atrocities. God is in the details, they say. So is the Devil.”

Me in costume for my "cameo," September 2016. First episode. #HandmaidsTale - Margaret Atwood