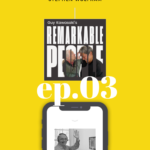 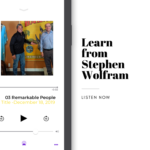 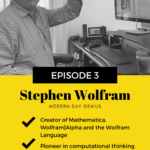 Stephen Wolfram shares remarkable lessons from his life and how he build the things he wanted to use.

Stephen Wolfram is “physicist” but that's like saying LeBron James is a “basketball player” and Sir Donald Bradman is a “cricketer.”

Have you ever wondered what it's like to get a Ph.D. in Physics at twenty and win a MacArthur Award at 21? For that matter, have you pondered the math of rhinoceros horns? These are just two subjects that are covered in episode.

If you're a math or physics geek, you've probably used a software application that he created called Mathematica. He's also built a knowledge engine called Wolfram Alpha that you have used in Siri, Alexa, Bing, or DuckDuckGo.

Warning: your head might explode by listening to this episode though Wolfram describes what he does as simply “figuring stuff out.”

It has been proven that the universe is computationally equivalent to my ego. Stephen Wolfram Click To Tweet

This week's question is:

Question: If you could, what would you create to make your life easier?