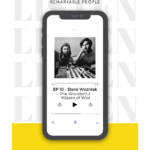 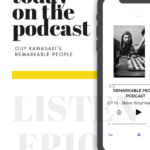 He is the co-founder of Apple, prankster, iconoclast, concert producer, Dancing with the Stars contestant, and college graduate.

True or false? Woz is still an Apple employee. Keep listening, and you’ll find out.

IMHO, he is one of the purest examples of the profession of engineering. No matter how you cut it, no Woz, no Apple.

If you, or someone you like, is a tech entrepreneur, listening to this episode is a must.

I’m Guy Kawasaki, and this is Remarkable People. Now here’s the wizard of Woz.

This week’s tweetable:  Does Woz have to wait in line for the new iPhone? #remarkablepeople #technology Find out here Click To Tweet

Why is Woz a pirate? In January 1983, “Steve Jobs gathered a group of Apple employees at an off-site retreat in Carmel, California. The group was in the midst of developing the Mac, the company’s hugely ambitious personal computer—and some employees felt the project was losing its scrappy spirit. And so Jobs offered a maxim meant to motivate the developers: “It’s better to be a pirate than join the navy.”

This wasn’t about treasure maps and eyepatches. “Being a pirate meant moving fast, unencumbered by bureaucracy and politics,” software engineer Andy Hertzfeld, an original member of the Macintosh team. “It meant being audacious and courageous, willing to take considerable risks for greater rewards.”