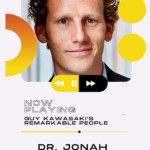 This episode’s remarkable guest is Dr. Jonah Berger. Dr. Berger is an associate professor of marketing at Wharton.

He is the author of three books: Contagious: Why Things Catch On; Invisible Influence: The Hidden Forces That Shape Behavior; and The Catalyst: How to Change Anyone’s Mind.

And he has a fairly current iPhone.

In this episode, we cover topics such as:

Contagious: Why Things Catch On

The Catalyst: How to Change Anyone’s Mind

Guy Kawasaki:
I'm Guy Kawasaki, and this is Remarkable People. This episode's remarkable guest is Jonah Berger.
Jonah is an Associate Professor of Marketing at Wharton. He received his BA from Stanford in human judgment and decision making, and his PhD from Stanford in marketing.
He's the author of three books – Contagious: Why Things Catch On, Invisible Influence: The Hidden Forces that Shape Behavior, and most recently, The Catalyst: How to Change Anyone's Mind. He also has a fairly current iPhone.
In this episode, we'll cover topics such as overcoming the inertia of the status quo bias, making what you can sell versus selling what you can make, removing barriers versus bludgeoning your way. If you're interested in introducing new products, convincing people to wear a mask, or motivating your children, you'll find this episode remarkably helpful.

This is remarkable people.