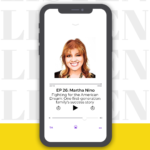 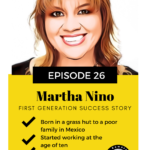 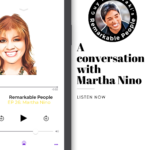 It’s unlikely that you’ve heard of her, but you someday will. She currently works at Adobe in a senior marketing position. How she came to be a guest is a good story.

10 years ago she saw me give a keynote speech for Adobe. I guess I impressed her.

A year ago Adobe held a diversity conference and invited employees to submit stories. Hers was one of 8 selected. Let’s just say that typically one doesn’t seek opportunities to talk about an illegal alien past in front of your company, so that took courage.

A few months ago she happened upon one of my LinkedIn Live chats and reached out to me.

I usually ignore LinkedIn messages because most are requests to be BFFs with people I don’t know, but I read hers.

It pointed me to her video, and I liked it so much that I sent it to Jacob Martinez, the exec director of Digital Nest, an organization in Watsonville, CA that helps young people gain digital skills. I asked him if her message was suitable for this podcast.

He loved her talk and told me to go for it. So I reached out to her and asked her to be on this podcast.

How she achieved success is remarkable because she was born in a grass shack in central Mexico. Her parents were laborers on cotton farms there. Seeking a better life, her parents paid coyotes to smuggle them across the border. She made the trip separately as another woman’s baby.

She grew up in Fremont, California in a multiple-family, one-bedroom house. She began working at ten as a newspaper girl.

While in school, she worked for a manufacturer. For fifteen years, she and her parents were illegal aliens.

Her path was rocky, but she worked hard and achieved a college education. She entered the tech field in a facilities capacity, and now she’s working at Adobe.

She’s living the American Dream of starting with nothing and achieving happiness with her husband and two daughters. America is lucky to have her.

I’m Guy Kawasaki, and this is Remarkable People. And here’s Martha Nino.

I hope you found Martha’s story inspiring. She taught me several lessons:

First, I was lucky that I’m a third-generation American.

Second, you’ve got to love parents for what they are willing to do and risk to give their kids a better life.

Third, it doesn’t matter where you start, what matters is where you end.

Fourth, never under-estimate the kindness of strangers—even strangers who don’t look like you.

America is lucky to have her and the millions of immigrants like her who have made America great. Their presence is as good for America as it is for them.

What sacrifices has your family made to get you where you are today? How did that inspire you? #remarkablepeople Click To Tweet