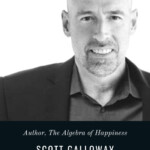 This episode’s guest is probably the most outspoken person I’ve had on the show so far. His name is Scott Galloway. Scott is a professor of marketing at NYU Stern and the founder of section4. He was also the founder of the eCommerce company Red Envelope and the marketing firm Profit, a previous guest David Aaker is vice chairman of Profit.

I highly recommend his presentation on YouTube called The Algebra of Happiness it, he tells it like it is and tells it like he sees it and explains what makes people happy. Spoiler alert: it is not pursuing your passion. Scott served on the board of directors of Eddie Bauer, the New York Times Company, Gateway Computers, Urban Outfitters, and the Berkeley Haas School of Business.

In this episode, he shreds Facebook and Mark Zuckerberg, the thought that colleges should open back up in the middle of a pandemic, and cluelessness in general.

Tell me? Have you ever heard anyone rip into Facebook and stupid decisions of politicians like Scott Galloway? Clearly he’s not trying to win any popularity contests. And that’s just one factor that makes him such a remarkable person.

He is a data point for all of us to tell it like it is.