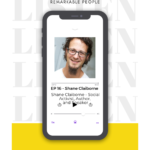 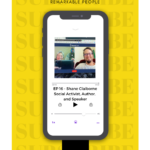 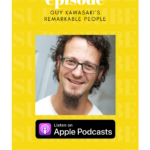 This episode’s guest is Shane Claiborne. Claiborne is what one would call a “cool” Christian. He’s the author of ten books and he has worked alongside Mother Teresa. He also served in Baghdad on the Iraqi Peace Team.

Shane is the opposite of mega-church pastors with private jets and palace-like churches. He describes himself as “a champion for grace” which means he helps the homeless, protests against wars, advocates for the end of the death penalty, and supports methods to end gun violence. One of his props is an AK47 rifle beaten into a plow. Claiborne is also the co-founder of Red Letter Christians. (Named because the words of Jesus were printed in red in bibles.)

Among the organization’s values are: Freedom comes through serving others — not power, politics, or materialism. Diversity and collaboration make us stronger, not weaker. We embrace and work alongside people of different faiths, erasing the lines of “us vs. them.”

By the way, do you know why Gandhi traveled in third class on trains in India? Keep listening to find out.

I hope you enjoyed this interview with Shane Claiborne. Actually, I hope that it challenged you too. When in doubt, check what’s in red.

And now you know why Gandhi traveled in third class. My thanks to Jeff Sieh and Peg Fitzpatrick. And my thanks to Katie Jo Brotherton who helped make this interview happen.

This week’s Remarkable People question is: