This episode’s guest is Dr. Katy Milkman. She is a professor of operations, information, and decisions at Wharton.

She is also the author of How to Change: The Science of Getting From Where You Are to Where You Want to Be. For those of you who are influence, persuasion, and social psychology fans, this is required reading.

I would put it on par with Influence: The Psychology of Persuasion. In fact, you should think of Katy as the next generation Bob Cialdini–who by the way is my guest next week. Katy covers topics such as impulsivity, procrastination, forgetting, laziness, confidence, and conformity in this book.

I didn’t plan it this way, but the episode starts with a customer reference about our sponsor, the reMarkable Tablet Company. One thing that I’ve learned about good marketing is that you have to take it when you can get it.

I will be live streaming on April 28th at 10 am PT, watch then or catch the replay. 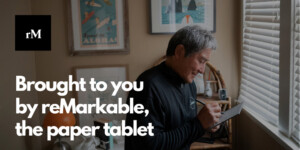 Don’t forget to grab a copy of Dr. Milkman’s book, How to Change. It will teach you:

•   Why timing can be everything when it comes to making a change
•   How to turn temptation and inertia into assets that can help you conquer your goals
•   That giving advice, even if it’s about something you’re struggling with, can help you achieve more

Whether you’re a manager, coach, or teacher aiming to help others change for the better or are struggling to kick-start change yourself, How to Change offers an invaluable, science-based blueprint for achieving your goals, once and for all.